By Inventory of Historic Resources City of Calgary -

The Shawnessy Community Centre, a former Vernacular-style barn built in 1915 by homesteader John McInnes, is one of the few remaining buildings in southwest Calgary representative of the district’s agricultural past. The property lay outside the city limits until it was annexed in 1961. The last remaining structure of the Hugh McInnes homestead—the Grass Valley Ranch, designed by J.H. Thomas—is modeled on the style of Ontario hillside barns which allowed for easy access to the upper hay loft floor. It is a typical barn of the era featuring: light weight plank construction with drop siding, concrete foundations, and a gambrel roof complete with hay lifting monorail system. The barn is a rare example for Calgary and the only known example of the Ontario-style hillside configuration within the city. The park setting retains the sense of its original context. 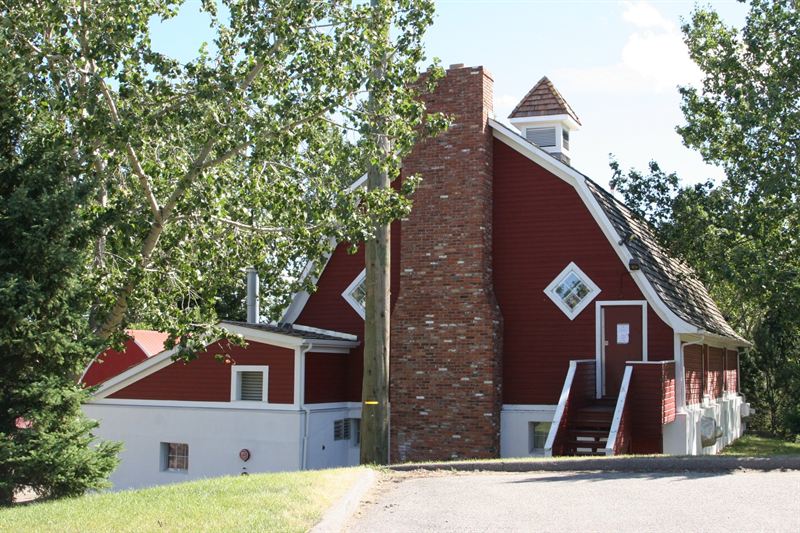 Around 1883, Ontario-born John McInnes (1864-1946) came west in the footsteps of his older brothers, who had homesteaded at Fish Creek, south of Calgary. After serving in the 1885 Northwest Rebellion as a transport wagon driver, John returned to Ontario where his father was ailing. In 1905, after his father’s death, John returned to Alberta along with his wife Margaret and their four children. They joined Hugh McInnes, John’s brother, on Hugh’s Grass Valley Ranch farm. After Hugh’s death in 1908, the farm became John’s property. The extant red barn was constructed in 1915. (The names of the horses are still burned into the beams, in the area that now [2002] houses the community centre’s kitchen) A lean-to built at the time of construction housed dairy cows. The building was designed by J.H. Thomas.

John and Margaret McInnes were popular and highly active in Midnapore, as the school district and nearby hamlet were called. John served as justice of the peace from 1910-1935. John was a member of the Alberta Wheat Pool, the United Farmers of Alberta and the Independent Order of Foresters. He was a life member of the Southern Alberta Pioneers and Their Descendants. Margaret died in 1933 and John retired to Calgary in 1935. Their son Charles Duncan McInnes and his wife Margaret then took over the farm, raising shorthorns and dairying. Their son John Joseph McInnes and his wife Elaine operated the farm until about 1973, when they moved to Olds.

The next owners were oilman Lowell Williamson and his wife, entertainer Dorothy McGuire. They renovated the barn into a recreation centre, complete with a basketball court, washrooms and showers, a stage, fireplace and brick chimney, for use by area schoolchildren, residents and members of the Glamorgan Church of God. They intended to call the facility the Dorothy McGuire Youth Centre. However, Genstar Development Company acquired the former McInnes land by the late 1970s, and the area was developed as the residential subdivision of Shawnessy. Genstar renovated the barn in 1981 and converted it into a community centre.